In 2013, the number of Exchange Traded Derivatives (ETD) worldwide increased by 3% to 22 billion contracts, according to statistics compiled by the World Federation of Exchanges (WFE).

The WFE, which annually conducts a survey on derivative markets, found that in 2013, 22 billion derivative contracts (12 billion futures and 10 billion options) were traded on exchanges worldwide – a 685 million increase above derivatives contracts traded in 2012. The complete WFE analysis of global derivatives markets will be available in May 2013.

Other highlights of the preliminary WFE derivatives report regarding exchange traded derivatives (ETD):

Commodity derivatives: Commodity derivatives (+23%) saw the greatest increase in volume in 2013, largely as a result of two major factors: 1.) the transfer of cleared OTC energy swaps to futures in the United States by the InterContinental Exchange (ICE) in 2012 in anticipation of the final Dodd-Frank regulatory requirements, and 2.) the continuing sharp increase in volume at Mainland Chinese Exchanges (+40%). The United States and Mainland China accounted for 79% of the global volumes in 2013.

Other derivatives: The "other derivatives" category comprises a wide range of products including Volatility Index options, Exotic options and futures, REIT derivatives, Dividend and Dividend Index derivatives or CFDs. Volumes in this category increased sharply (+38.5%) in 2013, highlighting the ongoing innovation in derivatives offered by Exchanges. 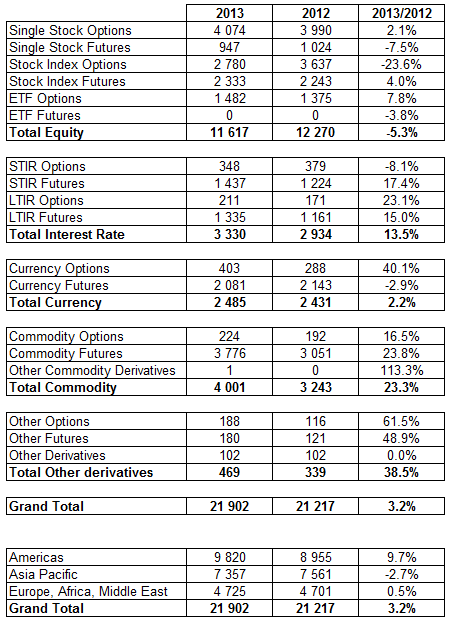