For the first time since 2004, the number of Exchange Traded Derivatives (ETD) worldwide decreased in 2012 by 15% to 21 billion, according to statistics compiled by the World Federation of Exchanges (WFE).

The WFE, which annually conducts a survey on derivative markets, found that in 2012, 21 billion derivative contracts (11 billion futures and 10 billion options) were traded on exchanges worldwide - a decrease from the 25 billion traded in 2011. The full WFE report on derivatives markets will be available following the annual IOMA conference held this year in Busan, South Korea, from 5 to 8 May 2013.

Other highlights of the preliminary WFE derivatives report regarding exchange traded derivatives (ETD): 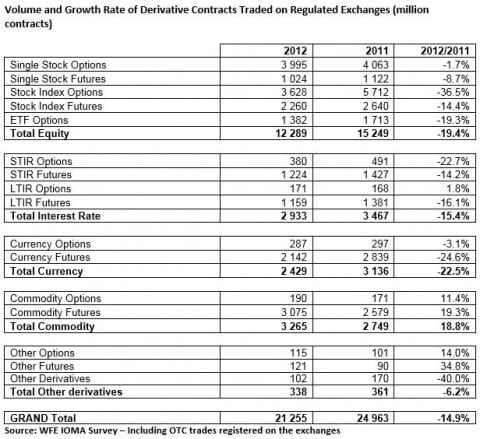 The World Federation of Exchanges is the trade association for the operators of regulated financial exchanges. With 58 members from around the globe, the WFE develops and promotes standards in markets, supporting reform in the regulation of OTC derivatives markets, international cooperation and coordination among regulators. WFE exchanges are home to more than 46,000 listed companies.